OUT OF WORLD ORDER 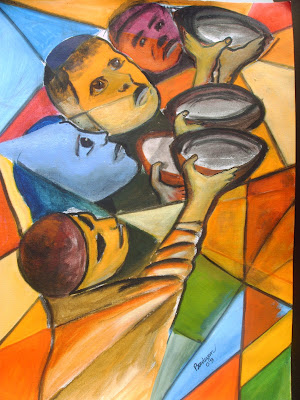 THE NEW WORLD ORDER
The New World Order is supported by the human poverty and environmental destruction. Gives rise to social apartheid, encourages racism and ethnic conflicts, undermines the rights of women and often precipitates countries for destructive confrontations between nationalities. Since the 90s, has extended its domain to all major world regions, including North America, Western Europe, countries of former Soviet bloc and the "newly industrialized countries' (NPI) and Southeast Asia, the Far East. Help stop hunger in the world is the obligation of major global institutions, the creation of jobs in developing countries so they can live out their own work with dignity, so that their children can attend school and to contribute to the development General of the planet.

Esta é uma releitura de uma das obras mais sensiveis e relista de uma das maiores pintoras
mundiais Senhora Käthe Kollwitz:
lifelong commitment to championing the rights of underprivileged people and an extraordinary ability to express human suffering in artistic terms characterize the work of Käthe Kollwitz. As part of a politically progressive, middle-class family in Königsberg (now Kaliningrad, Russia), Käthe Schmidt was encouraged to develop her skills in painting and drawing. By age 14 she was taking private classes with local artists, since the Königsberg Academy barred female pupils. She later studied in Munich and Berlin.
In 1891 Schmidt married the physician Karl Kollwitz and later had two sons. The family settled in a working-class neighborhood of Berlin, where her models and her husband's patients were the urban poor. Intrigued by both the narrative potential and the democratic qualities of the graphic arts, which could be produced in inexpensive editions, Kollwitz decided to become a printmaker.
For the next 50 years she produced dramatic, emotion-filled etchings, woodcuts, and lithographs-generally in black and white but sometimes including touches of color. Although Kollwitz's wrenching subjects and virtuoso technique soon made her work popular throughout Germany and the Western world, they also generated controversy. In 1897, for example, Kaiser Wilhelm prevented Kollwitz from receiving a gold medal at the Berlin Salon because of the "subversive" nature of her subject matter. Kollwitz also encountered difficulties during the Nazi era. In 1933 she was forced to resign her position as the first female professor appointed to the Prussian Academy (in 1919); soon thereafter she was forbidden to exhibit her art.
During her final years Kollwitz produced bronze and stone sculpture, embodying the same types of subjects and aesthetic values as her work in two dimensions. Much of her art was destroyed in a Berlin air raid in 1943; later that year, Kollwitz was evacuated to Dresden, where she died at 78.